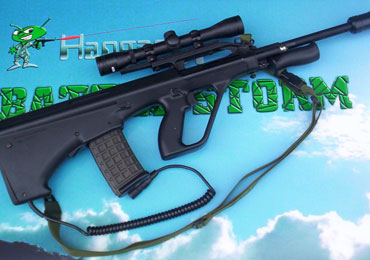 This is a replica of the Steyr AUG assault rifle developed for the Austrian Army, entering service in the late 1970s. It is considered the most successful of the bullpup designs, and has been adopted by many armed forces throughout the World including Australia and New Zealand. Bullpup maximises barrel length by situating the action and magazine behind the trigger.