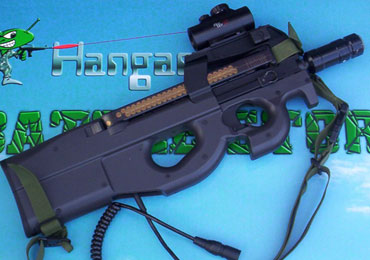 This is a replica of the FN P90 submachine gun (SMG), developed by the famous Fabrique Nationale de Herstal in Belgium in the late 1980s. It was primarily designed as a Personal Defence Weapon (PDW) for vehicle and tank crews. Despite its original intention as a PDW, it has been adopted by many agencies throughout the World for offensive roles and even as a primary weapon for assault teams.